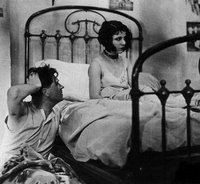 1930, France, directed by René Clair
Like many films at the beginning of the 1930s, Sous les toits de Paris still has one foot firmly in the silent days, something that inevitably dates the picture for modern audiences. Many scenes, even those in which the actors are clearly speaking to each other, have a musical accompaniment alone, while the dialogue is not especially memorable (a few years later, Jacques Prévert and others would ensure that snappy dialogue became a cornerstone of French filmmaking). The performances, too, are reminiscent of silent days: the actors' movements are frequently exaggerated and wide-eyed, in contrast to the more naturalistic acting style that developed later, particularly once the possibilities of dialogue were better exploited. However, notwithstanding these limitations - which have as much to do with the modern audience perspective as with the film itself - Sous les toits de Paris retains great charm, from the elegant opening shot (filmed in a studio, and paired with a similarly graceful parting shot) which takes us down to street level, and into a crowd singing the title song, as a young man (Albert Préjean) attempts to sell sheet music. Préjean's character is, like everyone else, a creature of the streets, hard-scrabble but honest, living in an attic-room (hence the film's title), and hoping for a little cash and love. The story is very slight, and director Clair is indulgent with the running time, but there's no denying the director's affection for his characters: as poetic realism goes, he certainly errs on the side of the poetic, to mostly enjoyable effect (and the theme song will remain in your head for days afterwards).