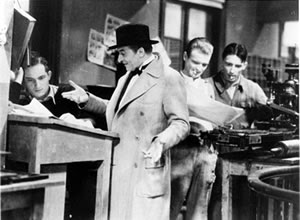 Jean Renoir's 1930s career must surely constitute one of the most extraordinary periods of artistic production in film; he seemed to casually turn out masterpieces almost every year while constantly expanding the limits of what is possible in cinema. This 1936 feature is no exception, and is filmed in a beautifully fluid style that fits an abundance of action into a compact, comprehensible whole. It remains absolutely fresh seventy years after it was made - while simultaneously capturing, as few other films have, something of the spirit of the Popular Front, the alliance of left-wing parties that came to power in elections held a few months after the release of Renoir's film; the heady atmosphere of those years was already in the air when Renoir was filming, and the optimistic portrait of the working class's future is very much of the age.

In portraying the capitalists and those they exploit, Renoir makes use of the conceit of an apartment building - or rather a courtyard - around which all human life revolves, something that crops up quite frequently in French films of the period: René Clair made good use of the idea, while Julien Duvivier exploited a similar location to masterful effect in La Belle équipe, also from 1936, and very much a Popular Front film. The dialogue is by Jacques Prévert, and has a wonderful snap, though it's not always well-served by the workmanlike subtitles (which would, in any case, have a hard time keeping up with the pace), while the acting is almost uniformly strong. Even against that backdrop, though, Jules Berry delivers one of the great performances in French cinema, a wonderfully oily turn as the predatory boss of the publishing house around which the action centers, and who gets his comeuppance in a manner that argues for the occasional intervention of natural justice.