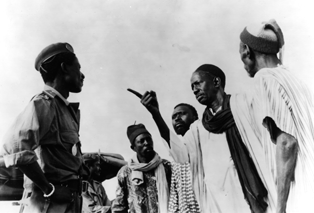 Guelwaar belongs at the very top of Ousmane Sembène's cinematic oeuvre - which makes it all the more extraordinary that the film is almost impossible to find - with the director making sublime use of the artistic means at his disposal (the camerawork and use of colour are especially notable) in a film that covers issues of religious tolerance, tradition versus modernity (a common theme in films from across Africa), and the politics of international aid. The many weighty themes don't for a moment get in the way of the human drama, though, with a plot that revolves around a case of mistaken identity involving two corpses - one of them that of the title character.

One of the most impressive facets of Guelwaar is the manner in which Sembène solves the challenge of marrying political points with a flowing, convincing storyline; one key scene, a flashback focused on a fiery speech, illustrates the elegance of his approach. His re-creation of the titular character, Guelwaar, is also remarkable: he is brought to life through colour-coded flashbacks (in one case uproariously funny) and, in a stunning sequence, through his widow speaking to his empty suit as it is laid out on a bed. The supporting characters are sketched in convincing detail, with Guelwaar's wife, his eldest son, and the local policeman emerging especially strongly. The policeman is notable too in that his profession is rarely seen as trustworthy, whereas here his general good sense and personal tolerance are key to calming the complex situation that emerges when a Christian man is accidentally buried in a Muslim cemetery. Sembène's eye for the details of village and city life has perhaps never been used to better effect in observing the policeman, who shows careful respect for a variety of traditions, obeying the simple rituals that lend daily life much of its rhythm and dignity.