Apichatpong Weerasethakul revisits several of the themes of his previous films in his third feature, but it seems to me that the film marks a step in a new direction, one where he makes use of a much greater range of cinematic means - placement of actors, camera movements, even special effects. It's a little like watching a flower suddenly burst into bloom: it's the same plant but there's a striking vibrancy about the result. It's hard, for example, to imagine his earlier work including a shot as stunning as that where one of the main characters disappears into the night, his shirt visible long after the rest of him has merged with the forest. However, he pursues these new explorations without losing sight of his familiar obsessions, and without compromising his exceptional attention to atmosphere. 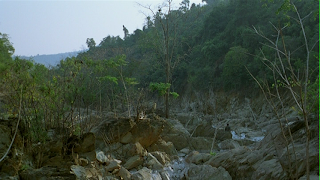 Like his preceding film, Blissfully Yours (and his subsequent Syndromes and a Century), the film is divided into two parts. The first segment is a richly evocative rural romance between a soldier and a young man in the town where he is posted (the affair is accepted in unruffled terms by those around the two men, perhaps enhancing the sense of a pastoral idyll). As in his first film, Mysterious Object at Noon, Weerasethakul allows his camera to linger on faces and locales that have no great narrative significance, but which contribute to the acute sense of place; you almost expect these people to reappear later in the film, but that's not really the director's purpose. 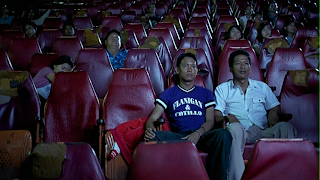 As in much of Weerasethakul's work, the confrontation between tradition and modernity is a central theme: there are abrupt intrusions from the modern world, whether it be a brightly-lit shop, or an open-air exercise routine set to dance music. These co-exist with the telling of a folk tale or a visit to a site of spiritual significance, and as the film moves into its second segment the sense that there's an entirely different world running in parallel to the "real" world of modern Thailand is brought to vivid life. This other reality is most fully expressed in the forest, far from others, just as the forest serves as a place of both almost mythic revelation and renewal in Blissfully Yours. As in that film, the prolonged sequence in the forest is intensely atmospheric, with an especially rich soundscape, and time itself seems to lose any meaning. A film that begins as a relatively realistic story becomes enmeshed with the narrative of Thai folk tales, revealing a completely different lens through which to interpret the world. 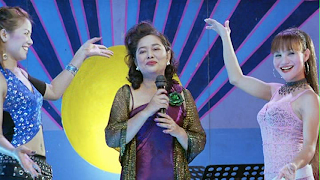 My particular enthusiasm for the film may stem from the fact that Weerasethakul makes use of one of my favourite cinematic devices: a journey through a city, by night or by day, car or motorbike, set to music. Whether it's Nanni Moretti on his Vespa exploring Rome to the sounds of Keith Jarrett in Caro diario, Maggie Cheung on the back of a motorbike in a Parisian night in Irma Vep, with Ali Farka Touré and Ry Cooder on the soundtrack, or a car driving through the streets of Barcelona accompanied by Ismaël Lô's "Tajabone" in Pedro Almodóvar's Todo sobre mi madre, I'm a sucker for them all. Weerasethakul's nighttime journey, with music by the a group calling themselves fashion show, is no exception: it's a terrifically evocative sequence, both of the Thai night and the feelings of someone newly in love. 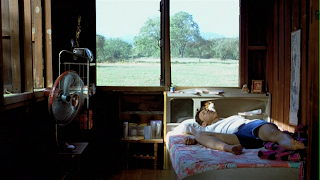 That sequence on the motorbike has an appealing sense of being shot on the fly - I wonder if some of the moments the camera captures while moving along were fortuitous rather than planned - but I love, too, Weerasethakul's more careful compositions, like the shot, above, of a bed and a window, that recalls a shot from near the end of his first film. Or that below, where the soldier character (out of uniform) is foregrounded; the placement of his actors gives the shot a slightly unnerving feel, as though the main actor is about to burst out of the screen. 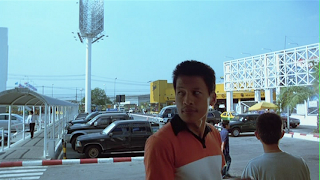 My particular enthusiasm for the film may stem from the fact that Weerasethakul makes use of one of my favourite cinematic devices: a journey through a city, by night or by day, car or motorbike, set to music.

Have you seen Rebels of the Neon God? I love the motorcycle scene in that one. I wish I could find the music somewhere.

No, I haven't - but I just added it to my Netflix queue!

I don't know what happened with the stills here; I can't seem to get them to be bigger, which is a shame because I think this might be his Weerasethakul's most visually striking film. If you click on some of the images, you can see enlarged versions, but the embedded ones are stubbornly refusing to enlarge.

I love your take on this. Such a mysterious, harshly beautiful, haunting film. Rebels of the Neon God too is a fantastic film. But then for this reader, Tsai Ming-Liang cen do no wrong.

Night time journey through a city, in the capable hand of a driver I trust. Not going anywhere in particular, just enjoying the ride, and the music, and not talking. (This, I have to admit, is my ultimate non-sexual fantasy - and that it is brought to life in such esteemed films is a source of unending gratitude).

Aha! I figured out the pictures problem. I don't think I understand the problem, but that's another issue.