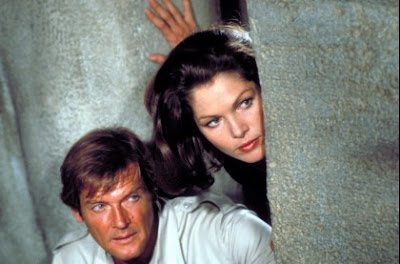 
Especially, that is, for Bond himself: there's an even longer parade of women than is usually the case, so much so that it becomes hard to sort them out, and the unreconstructed nature of the character comes to seem all the more jarring as the world around him changes. On the plus side, Michel Lonsdale is very enjoyable as the slithery, urbane Hugo Drax, delivering even his silliest lines with low-key relish, and playing straight man to the indestructible Bond. Lewis Gilbert, back for his third Bond, films a remarkable number of scenes almost wordlessly, and many of the action scenes have virtually no dialogue at all. At times, this is really quite effective: there's an especially good sequence when James goes exploring Drax's mansion at night, with Gilbert panning the camera away from Bond towards the door to track an unexpected arrival. It's just a shame that as we leave the earth such simple craftsmanship seems to fall away too.

There is simply no way this one's worse than Octopussy or even The Man With the Golden Gun. I think it's fun, and frankly I would watch it over any of the dour Dalton Bonds. Chiles was a major beauty, wonder what happened to her?

After being led to believe it would be dreadful, I rather enjoyed the movie; I don't have fond memories of most of the 1980s for Bond, with the exception of Carole Bouquet in For Your Eyes Only. Chiles is stunning in this film; career-wise, it's not like sh's been idle, but you really wouldn't be rushing out to see much of her filmography.