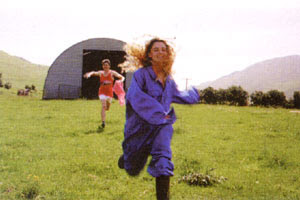 Visually, there are several clever, low-budget effects - a house that appears to be moving and levitating is especially amusing - and a number of striking shots, especially as Miranda Otto runs across North Island farm country trailing a red sari; Sinclair has a real sense of the uniqueness of New Zealand's landscape, and succeeds in capturing something of the isolation so elemental in Vincent Ward's early films, particularly Vigil.