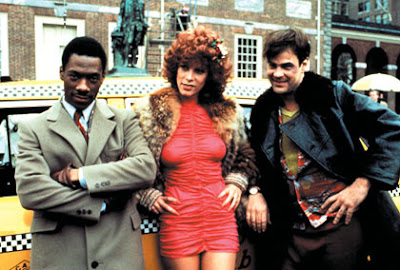 The film benefits greatly from this sense of place, since it gives the central conceit a very concrete reality: the role reversal literally means a move from one neighborhood to another, a confrontation with another world that exists in parallel while usually remaining invisible. Landis and his stars, Eddie Murphy and Dan Aykroyd, milk the confrontation for all they are worth, each actor nimbly taking on the role of essaying both upper and lower class behaviour, and attempting to reveal some hidden truths in the process.

That said, the film remains very much of its time: for all the satire of the tenuous morality of the businessmen, in true Reagan-era style the stock market is still the potential saviour so that anyone with some old-fashioned up-by-the-bootstraps ingenuity can make a killing on pork bellies or frozen orange juice. Still, that doesn't stop you pulling for the little guy, as represented here by Eddie Murphy at the height of his comic skill; he had a glorious if ultimately rather brief run before descending into the most formulaic of fare.


(Sidenote: I was inspired to go back to the film, which I must have seen a dozen times on TV, after reading Dave Kehr's New York Times column a couple of years back; that piece includes a reconsideration of his own earlier thoughts on the film.)