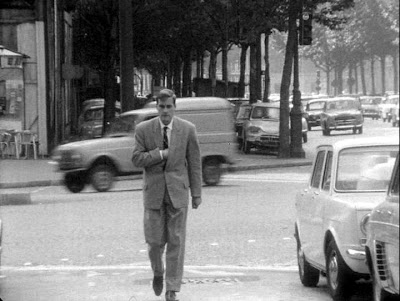 After Eric Rohmer's death earlier this week, I returned not quite to the beginning but to the first entry in his "Six Moral Tales" series, the sequence of films which first made his name. This initial entry is a short, just 22 minutes long, made at a time when Rohmer had difficulties raising funds for his projects as his first feature, Le signe du Lion, made in 1959, was a commercial failure. Although La Boulangère de Monceau is a relatively slight entry in the "Six Moral Tales" cycle, it displays many features of Rohmer's later cinema in nascent form, perhaps most notably his characters' taste for self-examination, with the narrator discussing, in voiceover form, his differing attractions to the eponymous baker and another eye-catching woman from his neighborhood. The narrator's commentary is notable for its careful self-justification, a cast of mind that Rohmer returned to time and again as his characters tried to navigate between conflicting desires and their own sense of right and wrong (a sense that is still developing in this student narrator).

Rohmer is careful to anchor his film in a very real Paris: the narration opens with a description of the exact locations of the film, and the camera frequently flashes to street signs so that we know exactly where we are on the map. We quickly gain the sense that the characters live in a very circumscribed portion of the city, such that the narrator can wander up and down the same section of street in search of the woman who is occupying his interest (the still above shows him pacing; Rohmer zooms in on him at one point, narrowing our field of vision just to the individual figure). The film also has considerable offscreen interest: the actors include Barbet Schroeder, an important figure in 1960s French cinema, not least as Rohmer's producer, and Michèle Girardon, recently returned from her stint on Howard Hawks's Hatari!