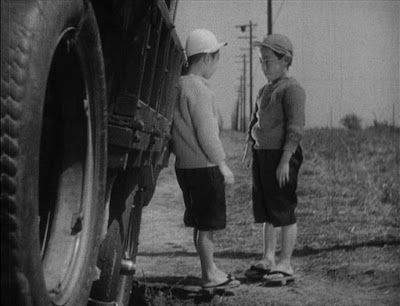 As in Tokyo Story, made the previous year, Ozu combines here an acute sense of time and place with a deep appreciation of the emotional challenges of family and social life. Even when he's constructing careful visual jokes, we remain constantly aware of the slightly shabby setting of the film, a rather dusty suburb that's most notable for an accumulation of train tracks, and the upward striving of the film's father figure; there's something Tati-esque about the importance of the physical setting.

The film is constructed around a series of rituals and obligations, two boys going to school - or sometimes avoiding it, in one lovely afternoon of mitching - and their father heading out to work. The trio start their day together before going their separate ways, their paths often re-intersecting late in the day, with the boys slowly gathering a sense of their father's place in the social hierarchy - a traumatic discovery when their interactions with the other neighborhood boys largely consist of assertions along the lines of "my father's better than yours!"

The humour emerges often from the cuts from one space to another - a tracking shot down a row of school desks that becomes a row of office workers, equally beholden to the figure at the head of the classroom, and a beautiful articulation of the way in which schools help to create good adult citizens. Indeed, Ozu's camera seems to be constantly on the move here, following the gangs of boys as they roam near the train tracks, or within the confined spaces of homes and offices.