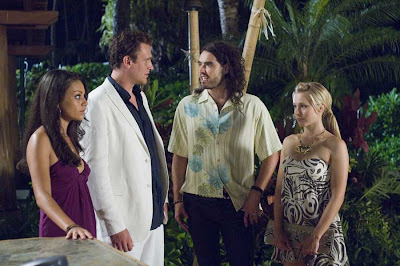 2008, US, directed by Nicholas Stoller

While there are several very amusing patches in Forgetting Sarah Marshall they're diluted by far too much padding in a two-hour film that sorely needs the attention of a dispassionate editor. Even assuming that the plot isn't a big deal here - it's not - the film is stretched out far beyond what the material allows: like Judd Apatow, from whose stable the film comes, Nicholas Stoller is so generous in ensuring that each performer has a scene or two in which to shine that he fails to keep any overall sense of rhythm to proceedings. That being said, Russell Brand - playing a character, rocker Aldous Snow, not all that dissimilar to the Russell Brand of British tabloid lore - is exceptionally amusing, the one character who might profitably have been given more screen time (and, right on cue, the character is due to re-appear in a 2010 film).

Russell Brand made that movie. Not sure about the upcoming "Greek" one, though... too much of a good thing?

I concur, on both points.