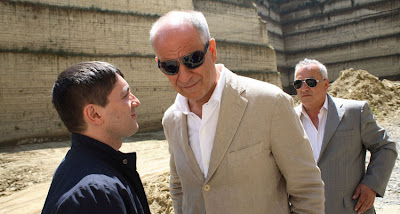 The broader social questions aside, I found the film to be an impressive piece of work, which plunges the viewer into the world of the Camorra with no preliminaries - the relationships between the characters are barely explained, and we often don't even get the characters' names. The action changes from one aspect of the Camorra's operations to another - the blooding of new recruits, or the operation of business fronts - with no more warning, almost mid-scene on occasion. Garrone's concern is less to resolve individual plotlines, although some segments are brought to a conclusion, than to create a sense of the Camorra's pervasive impact on life in the region. There's nothing hidden about most of their work - unlike many films devoted to the underworld, Garrone shoots the vast majority of the film in broad daylight, with all of the thuggery visible in the harsh light of southern Italy.