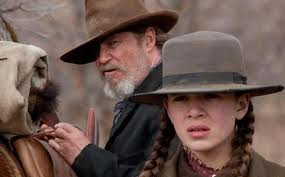 While the original film is very much a John Wayne vehicle, with Rooster Cogburn front and center, the Coen brothers center their take on the material instead on a battle of wills between a grizzled older man and a young girl who is at least as stubborn as her elder. Two early scenes fix the personalities of Rooster Cogburn and Mattie Ross, the former narrating his part in a shooting, relishing and burnishing his own already outsize reputation, while the latter refuses to stand down even when the only place she can track Cogburn is to the outhouse. There's a warmth throughout the film, especially in the central relationship, that sometimes seems absent from the Coen brothers' work - although they've always had an affection for the character actor, and they serve up several gemlike smaller roles, finely-sketched types drawn from many an old Western, like the country lawyer or the undertaker.