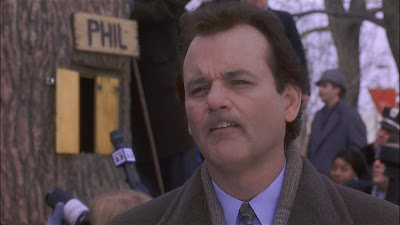 I don't have a whole lot to add to the extensive dissections of Groundhog Day - by everyone from film critics to philosophy professors - not least because I watched the movie in that hazy week after our first child was born. After taking in Ghostbusters 2 the evening before I was struck, though, by the way in which Bill Murray and Harold Ramis, who directed Murray in Caddyshack, play with Murray's well-established curmudgeonly screen persona (I'm just waiting for Murray's turn in a Walter Matthau biopic) as the film evolves. Indeed, that persona seems critical to the film's exploration of just what it means to be stuck in an apparently endless present. Where a standard Hollywood film would give a character like this an unlikely redemption, and an even more unlikely psychological transformation, within a few days or weeks, here Murray has to ultimately confront and make peace the possibility that he'll never escape this alternative dimension. His character's acceptance of that reality is what gives the film its power, for that requires a genuine shift in his way of seeing the world, a shift that's possible only when he stares into the abyss, as it were. And somehow Ramis manages to combine that profound reflection with a genuinely sweet, convincing conclusion - quite a trick.