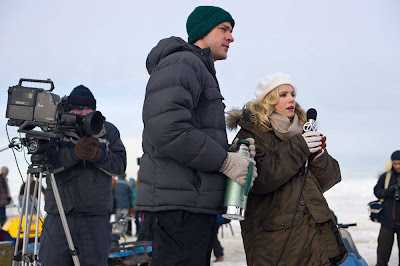 
Big Miracle unspooled immediately after Liberal Arts on the same long plane flight, so I was primed to see it, too, as a celebration of ostensibly simpler times, particularly when it comes to the communication arts, though that's literally the case here since the film focuses on an episode in late 1988 when there were just three major television networks in the US, whose anchors still commanded much of our attention. The film is surprisingly good at times in its commentary on the cynicism of all the players in the unlikely coalition that formed to free three trapped whales -- Ted Danson is cartoonish as an oil-company villain (probably because Danson is far too benign a presence to really convince in the role), but Greenpeace hardly emerges with a saintly reputation either as the film notes, accurately enough, how environmental crises can be highly useful to the institutional needs of NGOs, too. The film also makes intelligent use of the actual news footage, while commenting on the strange priorities of the news media -- though of course the filmmakers then eat their cake by making this film rather than something more genuinely challenging.