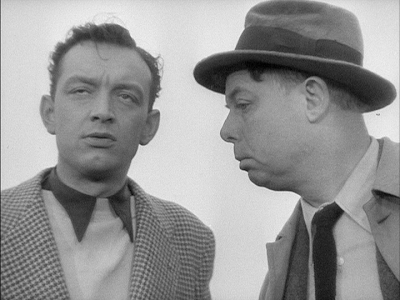 I've little to add to the enormous amount written about Renoir's film, surely one of the most dissected in all of cinema, except to note, once again, the wonderfully loose feel -- it feels as spontaneous, despite its perfection, as the vaudeville-esque stage show that takes place during the second half of the film. What astonishes me time and again (though it has been too long since my last viewing) is the delicacy of touch, the way in which farce can share a stage with high drama, or melodrama, and violence, without the juxtapositions ever seeming awkward. As the film approaches its climax, one set of players cavorts through the sets in a manner reminiscent of the Keystone Cops, or perhaps the Keystone Gamekeepers, sharing space with others attempting to resolve romances that span the spectrum from fleeting to lifelong. It's hard to resists framing any reading of the film against the backdrop of 1939 -- as catastrophe looms, Renoir seems to suggest that many are oblivious, dancing and playing on as blithely as those aboard the Titanic as the iceberg loomed, except that while those on board ship had no way to predict what was ahead France's citizenry in 1939 had no such excuse. 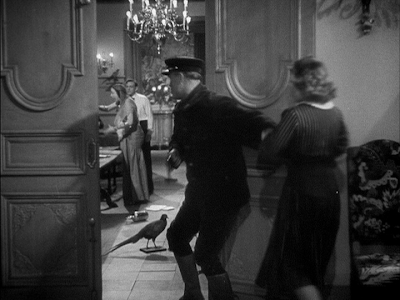 I last saw the film on the big screen, and my abiding visual memory of that viewing was the depth of many of Renoir's compositions, characters strategically placed into the far distance, whereas this time, on the smaller screen, I was struck most by the two shots, particularly those involving the character of Octave, played by Renoir himself -- two faces almost completely fill the screen at times, abstracted from the overall setting. I'd never noticed before how Octave, spilling great torrents of verbiage, might be seen as a precursor to later, comic, characters in the French pantheon, particularly someone like Coluche: for all the latter performer's different social standing, there's a similarity in the ways which both Renoir and Coluche employ words as a kind of battering ram while also making canny use of their size for both comic and serious effect. 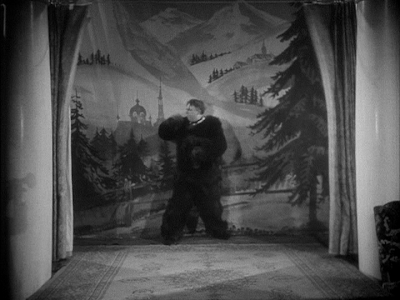