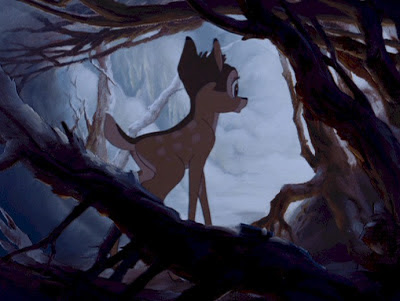 I missed out on a great many of the classic Disney films when growing up -- they didn't play on TV, we didn't have a VCR, and trips to the cinema were intermittent when we lived in the countryside. Shay's arrival is looking like the perfect opportunity for us both to get our introductions to the classics. Where he was absorbed by the antics of Bambi and Thumper, especially in the early going, I was bowled over by the extraordinary artistry, especially of the backdrops. DVD seems the perfect way to appreciate these gorgeous paintings, filled with beautiful shadings and exquisite details. I was aware that the film featured a reputedly traumatic sequence, but Shay barely even noticed: it's not played up to any great degree, and is immediately followed by one of the film's most comical sections, where the various animals succumb to spring fever. By contrast, he found the fire sequence impressive though not, I think, overly frightening; he did ask for some clarification during the scene featuring a chase by slavering dogs, but never took his eyes off the screen, and giggled no end during the aforementioned spring fever sequence.