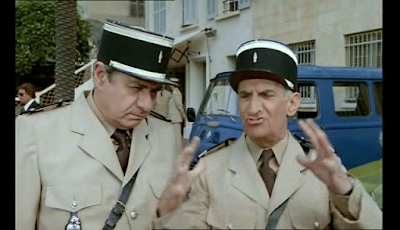 This is a contribution to the Late Films Blogathon hosted, as every year, by Shadowplay-er extraordinaire David Cairns.

A picture that counts double in the late film stakes: director Jean Girault died during filming of star Louis de Funès's swansong, the last of their dozen collaborations stretching back to the 1960s. Though their work was never of the highest cinematic order, it's still hard to imagine anyone choosing this particular picture as an epitaph. De Funès looks visibly aged, diminished by the heart condition that plagued him for some years, and indeed he's offscreen for lengthy chunks of the film, suggesting that the script was constructed very much with his absence in mind. 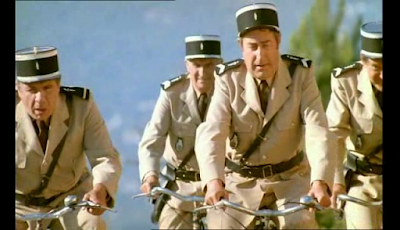 The sixth in a series of films that began in 1964, to which the law of diminishing returns applied with brutal effect (imagine the Pink Panther films, without the benefit of starting at a reasonable peak), Le Gendarme et les gendarmettes scrapes the inspirational barrel utterly dry, and de Funès is very much an old dog going through his old tricks. I've always struggled with his particular schtick, almost always preferring his more subtle onscreen partners, most famously Bourvil in the 1960s, though here he’s paired with Michel Galabru, who has roughly the physiognomy and the subtlety of a warthog, and Girault doesn't make any attempt to rein him in (whereas a director like Jean-Pierre Mocky could deploy Galabru's features to more sophisticated comic ends). 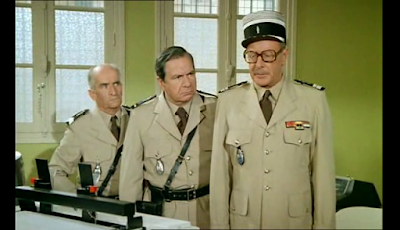 Both actors played in all of the Gendarme pictures, which made for some pretty superannuated cops by 1982, though the plot doesn't bother clarifying why they're still hanging around the station house when they should have been pensioned off. Ah, yes, plot, or in this case a device engineered purely to fill the screen with a succession of comely women who play a quartet of gendarmerie cadets as part an "innovative" training program. One of the four is African, and the daughter of an African president to boot, which provides the cue for a ham-fistedly offensive sequence in which she is depicted in tribal garb -- dancing, of course, as a prelude to a cannibalistic feast. Fans of workplace harassment -- all of it cheerfully tolerated, naturally -- will be heaven here, as will those who believe that female police officers are best attired in garb that looks like that of a Pan Am stewardess circa 1965. That the cadets, entirely predictably, emerge victorious over both their criminal adversaries and their lecherous supervisors doesn't quite excuse all that has come before... 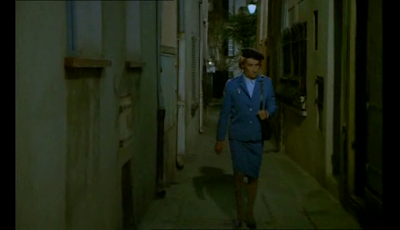 Truth be told, this is not the first year I planned to write about this particular picture but getting through this kind of thing is a slog -- there really are astonishingly few redeeming features, not unlike Jean Gabin's final film, also directed by Jean Girault -- a real career-end specialist, that one.