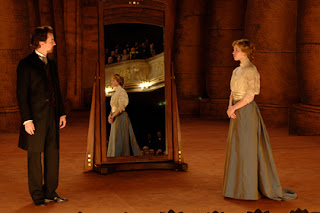 An absorbing arthouse/mainstream crossover, The Illusionist is well-acted, beautifully lit and possessed of a rare sense of time and place -- Vienna at the opening of the twentieth century, a place mired in court intrigues. Although the pacing is sometimes languid, Neil Burger never lets the story flag, carefully shading in details of character and allowing the viewer to piece together the central mystery of the film (the fact that it's not hard to guess in no way detracts from the film's interest).

Almost the entire film seems to take place at night, and Burger and his director of photography, Dick Pope, do a fine job playing, literally, with fire, gaslight and shadows. Edward Norton delivers his finest performance since since Spike Lee's 25th Hour as Eisenheim, an illusionist who has mastered the magical arts of East and West, and who discovers a new purpose for his skills on his return to Austria. Norton projects a kind of world-weariness that's mesmerizing in its own way, and that enables Eisenheim to carry off his trickery. Jessica Biel, who plays the object of Eisenheim's affections and, not incidentally, the rumored future crown princess, is luminous, capturing the kind of passion that might well lead a man to sacrifice his career. Paul Giamatti has an interestingly ambiguous role as a compromised police chief in the service of the odious crown prince; although his final scene is perhaps a little obvious, his awakening to the realities of his position is ably sketched.