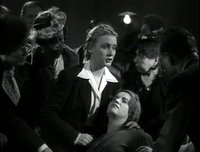 A spectacularly bitter piece of work from one of cinema's great pessimists, Le Corbeau is also a fascinating allegory about Occupation France, made for a German-controlled company in 1943. The film is set in a small town in the Paris region, where a writer of poison-pen letters has created a toxic atmosphere of suspicion; the epistles implicate virtually every one of the town's public figures. Although the director's usual despair in humankind is foregrounded, the very specific wartime context also lends his portrait of incestuous small-town life unusual depth and power. The script, by Louis Chavance and Clouzot, includes a wickedly satirical portrait of petty officialdom, noxious at the best of times but especially odious in the context of collaboration with the German authorities (who remain, however, invisible; indeed, the war itself is primarily an offscreen presence), but also comments presciently on the kind of mob justice that characterized, however understandably, the period immediately after liberation. There's an especially delicious sequence subverting the French classroom experience, with an extended dictation that ropes in the town's petty dignitaries. Among a host of striking images (perhaps most notably that of a letter falling from a church gallery), Clouzot makes especially brilliant use of shadow and silhouette; although the action mostly takes place during the day, the film was a major influence on the development of film noir, both visually and in that genre's view of the human condition.