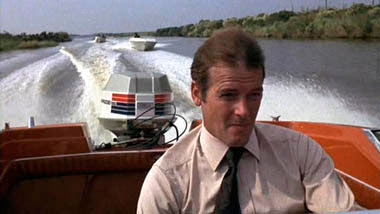 1973, UK, directed by Guy Hamilton
Roger Moore's first outing as Bond is one of the strangest entries in the franchise, a mélange of spy thriller, action and voodoo; if You Only Live Twice was "Bond in Japan", with a nod to the increasingly popularity of Asian action, this is "Bond Goes to Harlem", complete with a recycling of many of the themes of blaxploitation. It completely turns that genre on its head, since the hero of the hour is Bond, rescuing the lily-white damsel from her black captors, with black characters notable mainly for their villainy and cruelty (with the exception of Bond's occasional assistant, Quarrel) -- though the one truly laughable character in the film is a redneck Southern sheriff.

On the plus side, however, the film's main narrative, concerning drug-running rather than world domination, is more credible than usual, while the action sequences are generally entertaining; there are memorable boat stunts, as well as a sequence where Bond escapes from a crocodile-infested pool with a sprint over the animals' backs. Roger Moore makes a low-key debut as Bond, with some of the usual trappings missing, but he's an immediate improvement over George Lazenby, with a lazy charm that contrasts with Connery's sometimes thuggish version of the character (there's also a reworking of one of the franchise's most memorable fight sequences, that between Connery and Robert Shaw in From Russia With Love).