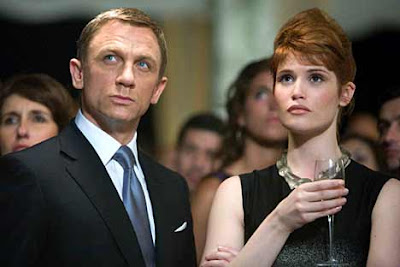 
Although at least some of the familiar Bond tropes are present here -- most notably Bond's ability to show up in virtually any context wearing Savile Row's finest suits -- the second Daniel Craig entry continues in the back-to-the-origins mould of 2006's Casino Royale. At times, there's a sense that the filmmakers are struggling with the arc of the entire series, as if they want to go back to a metaphorical fork in the road in order to choose instead a path more like that of a John Le Carré rather than the path that led, eventually, to the naked self-parody of the Roger Moore era (even so, there's a hat-tip to the Connery Bonds in the form of a death scene that evokes Goldfinger).

It's hard, though, to mesh the dour realism of The Spy Who Came In From the Cold with the glitz of international jetsetting and the kind of high-octane thrills that bookend, and punctuate, the film; while the film feels populated by characters who might actually be people, they're still people with an unlikely ability to survive the worst possible physical abuse with barely a scratch, and given the requirements of the Bond genre, the brooding can't be allowed to run the show (even if the throwaway one-liners are almost completely absent). Still, one of the film's most enjoyable sequences is on a melancholy transatlantic flight, as Bond and his old pal Mathis drink themselves through the night, wondering what might have been, while the film's coda tries to ground things once again in the kind of chilly Eastern European setting so well employed by Le Carré.

As this installment's main villain, Mathieu Amalric is surprisingly adept at menace given his vaguely nebbish persona in other appearances; the script is careful to portray his amorality in terms of both political and personal power, with those around him easily sacrificed to his larger ambitions. This new Bond's take on geopolitics also tries, in its own way, to turn back the clock, counteracting murky American dealings in Latin America and intervening on the side of the weak: the Americans can't be trusted for a moment, a point made rather obviously, even if Bond's paymasters need the information accumulated by their US counterparts.