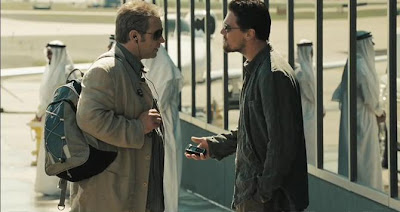 
This is Ridley Scott's fourth film with Russell Crowe, which makes it hard to understand why he uses the actor so poorly on this occasion. It's not that Crowe isn't suited to buttoned-down roles - Michael Mann's The Insider gives the lie to that idea - but simply that he's offscreen for far too much of the film, and when we do see him his character, one Ed Hoffman, is a relentlessly simplified caricature. In almost every scene of his domestic life, Hoffman has an earpiece to carry on incessant conversation whether he's driving his children to school or wandering around his home; after the first few instances of this we get that he's an obsessive workaholic, and it's time for a degree of character development.

Of course, that addiction to technology is part of Hoffman's distance from other human beings: they are best observed under distant surveillance rather than seen up close in their messy reality, the side of the spy business that concerns, in every sense, his field agent Roger Ferris (Leonardo DiCaprio). It's notable that Hoffman appears deeply resentful about those occasions when he must actually travel to the locations about which he's making decisions.

For a film dealing with life and death and, however superficially, contemporary geo-politics, there's also a curious lack of excitement in the film; Ridley's brother Tony gets more thrills out of the weaponry of surveillance in both Enemy of the State and Déjà Vu. It seems to me that it's ultimately a desire to be taken seriously in artistic/political terms that separates the brothers Scott: notwithstanding the derivative, even junky aspects of both of the Tony Scott films, they seem to succeed in unveiling something more essential about the ways in which humans are transformed by observing other humans from a distance (emotional, spatial - even temporal).