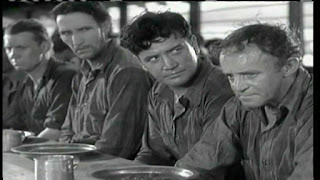 There's a fierce energy to Rowland Brown's filming, and a bluntness in the way he depicts the physical realities of the prison camp - the dreadful food, the constant effort to save money at the prisoners' expense, the brutal work regime in which any hint of exhaustion is interpreted and punished as serious insubordination - that's mirrored in the physical presence of his lead, Richard Dix, the alpha male among the prisoners. Both Brown and Dix's character, Duke Ellis, pair a certain bullishness with strategic cunning, eyeing opportunities to make their points with either fists or brain as the occasion demands.