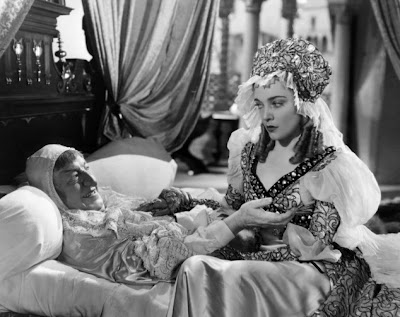 I loved Ben Jonson's original play when I read it in college, but I'd never previously seen Volpone on stage or film, and somehow it never occurred to me that it might be quite so broad in performance. This version is at a couple of removes from Jonson -- it's a filmed version of a stage adaptation that came the pens of Jules Romains and Stefan Zweig, which altered Jonson's original ending -- and perhaps it plays up the farcical elements to an even greater degree. That's especially true of Harry Baur's performance in the title role: although Baur is capable of great subtly elsewhere, his work here hits the same note over and over, with only the briefest of more nuanced asides -- the performance is in keeping with his enormous fake nose, as seen above.

Louis Jouvet, as Volpone's sidekick Mosca, is rather more toned-down, at least within the context of the play, and there are some terrific supporting players, especially Charles Dullin, a great theatre actor who tutored Jean-Louis Barrault and Marcel Marceau, among others; he plays the decrepit Corbaccio so convincingly that it's easy to forget the actor was only in his fifties. Maurice Tourneur, so good a director elsewhere, mostly settles for observing the actors at work, with only a handful of interesting shots (a conversation shot in silhouette, or the shadows of dancers late used as a striking backdrop); it sounds as though the film had a troubled production history in the early months of the Occupation, and perhaps in the end it's most valuable as a record of a work which had its greatest fame on the stage.