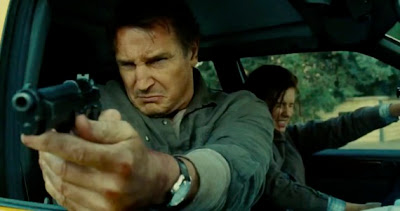 I haven't see the first of these films, so I can't judge it on continuity grounds, but Liam Neeson is surely the Carlton Palmer of action heroes -- two gangly men who look like extremely unlikely candidates for their assigned professions. Indeed, Neeson is so tall compared to most of his assailants that the fights look completely ridiculous whenever they're in long shot; Megaton's main solution to this problem is to render the combat sequences so completely incoherent that it no longer really matters. I like Neeson in many of his other roles, but what he needs here is the absolute seriousness of a Bruce Willis, capable of selling you something patently ridiculous by the sheer force of his commitment to the lines, however absurd. Even so, the whole enterprise is so perfectly machine-tooled that it's lacking almost completely in tension, with the outcome so obviously  fore-ordained; I'm not sure any actor can do a whole lot about that.

On the basis that I watched it at a cinema in Accra, I'll count as an entry in my Watching Movies in Africa project. I ended up seeing this particular film because I waited to see which of the late-afternoon screenings at the 5-screen Silverbird theatre at Accra Mall was most popular before plunking down my 16 cedis (US$8). The price alone, never mind the location of the Mall, well outside the centre of the city, makes this the kind of place that's off-limits for most residents of Accra. All of the films on offer had been playing for weeks -- there hadn't been a new film for nearly a month -- and so there were few people around that Sunday. The very small audience at Taken 2 was mostly made up of the (surprisingly attentive) teenage children of well-off Accra families; in the end, it felt like there wasn't anything much different about seeing this in Accra as opposed to Akron.