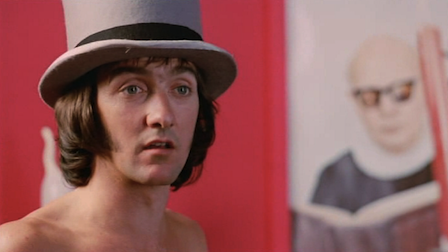 Part of a wave of films that took advantage of greater latitude on the part of the Australian censor, Alvin Purple is a pretty straightforward sex comedy -- with all that this implies in terms of easy laughs, acres of flesh, and a fairly freewheeling attitude to plot. While the film is a good deal more liberal with the nudity than British counterparts like the Confessions series -- there's also none of the double standard in which the men keep their clothes on while the women disrobe -- that is about the scope of its ambition, unlike, say, French cinema around the same time, which responded to a loosening of the censorship reins with films like Les Valseuses or, even more determined to upset bourgeois norms, Catherine Breillat's debut Une Vraie jeune fille. Until near the end, there's very little that seems distinctively Australian about the film, though the courtroom scenes have an oddly meta quality where they seem to be commenting as much on the real-life process of liberalization of local mores as the on-screen antics. Completely unrelated: an amusing sequence involving a car chase through a drive-in cinema, where the film may well have played on its release.