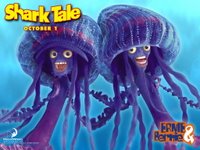 With the bar set so high by the Pixar films - especially Finding Nemo and The Incredibles - and Dreamworks' own Shrek films, it's hard not to be a little disappointed by Shark Tale: while it zips along nicely, with little wasted time, the basic storyline is a little trite, and the lead character (voiced by Will Smith) is a too hyperactive and self-obsessed to really prove endearing. However, while the overall framework isn't a success (and can't help but suffer when compared to the undersea antics of Finding Nemo) many of the incidental details are extremely enjoyable. Robert de Niro and - especially - Martin Scorsese are entertaining in a Mafia-movie parody (the Scorsese-voiced character has amusingly bushy eyebrows), and even funnier are Ernie and Bernie, a pair of rasta jellyfish, one voiced (for full authenticity) by Ziggy Marley.