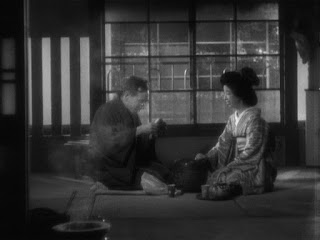 A beautiful early feature film from Mizoguchi, which overcame the terribly poor transfer available for viewing [I subsequently saw a restored version], Sisters of Gion is a fascinating portrait of a vanished time in Japanese history, set before the Second World War in Tokyo's geisha district. The film makes clear that this way of life is already disappearing: the two sisters of the title are divided on the proper behaviour expected of a geisha, with one searching for a striving patron, the other loyal to a diminished benefactor. Although the film is bursting with incident - the fate of the two sisters seems to hang in the balance until the final moments - it's shot in a very simple, direct style, with many of the carefully composed long shots, often using frames within frames, for which Mizoguchi is famous. He intersperses that straightforward style with several gorgeous tracking shots, including one that opens the film, which reveal he was already master of the mobile camera. If there's any weakness to the film, it's perhaps the overly didactic ending, which tends to repeat what the director has so eloquently conveyed throughout; it's reminiscent of the conclusion of Sembène's Mandabi, which also crosses the line from account to pamphlet, but in both cases that may be illustrative of filmmakers in the process of finding the voice with which to express their committed social vision.