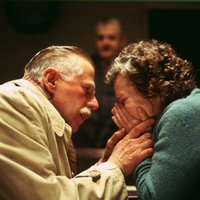 
Comfortably Mike Leigh's strongest film since Secrets and Lies, Vera Drake carefully evokes a very specific time in British history - the austere post-war years - as the backdrop for a tale of quiet yet radical rebellion. Imelda Staunton is astonishing, delivering the performance of her career as Vera, a gentle, caring woman who works as a house cleaner and who, in her spare time and in secret, conducts back-street abortions at no charge. Her clear-eyed view of the realities of the world is calculated to sow confusion in the minds of those who disagree with abortion; there's no doubting her integrity and her attempts to restore some kind of dignity to those around her, and her lack of eloquence doesn't prevent her from expressing her views to telling effect. The sense of time and place are brilliantly created through a series of apparently unconnected early vignettes, intermingling scenes of home and workplace life to great effect (one scene where the men discuss 'what kind of war' they had is especially telling); the actors who play Vera's family are uniformly strong, creating a detailed set of character studies. The one downside is Leigh's inability to create rounded middle- or upper-class characters; as in his other films, his class views are so narrow that the upper-class characters, especially, are almost without exception insufferable or unsympathetic. As a consequence, a subplot about a wealthy young woman having an abortion seems heavy-handed, over-emphasizing a point already made subtly throughout the film.