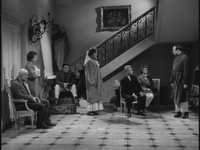 
Made for French television - though it also had a brief cinema release - Le Testament du Docteur Cordelier is Renoir's contemporary Parisian take on Robert Louis Stevenson's Strange Case of Dr Jekyll and Mr Hyde, with Jean-Louis Barrault in the dual role of Cordelier and his "experiment", Opale. The film comes complete with an "Alfred Hitchcock Presents" prologue, wherein the great director arrives at the television station and settles in before introducing his bizarre tale.

In that prologue, Renoir plays with perspectives, using television monitors to frame his monologue within larger frames, then cutting to a closer shot of his face. Later, once we enter the world of Cordelier and his creation, much of the action is shot in a manner reminiscent of the stage, with the characters carefully placed across the set, but as if to prevent the action from seeming excessively stage-bound, characters occasionally emerge from "behind" the camera.

Barrault, the great stage artist best known for his role as a mime in Marcel Carné's Les Enfants du paradis, plays his two roles with a minimum of special effects artifice. Cordelier is a pretty conventional doctor type - his research base recalls that of the doctor in George Franju's extraordinary film Les Yeux sans visage, made the same year - but Opale is a strange creature indeed. Though the character is prone to a bit of the old ultra-violence, and attacks a child in an early sequence, he moves almost like a dancer, and often recalls the physical comedy of performers like Chaplin. It's an unexpected interpretation that keeps the viewer constantly off-balance, never quite sure how to judge Opale, a creature born against his will from another's ill-judged experiments.