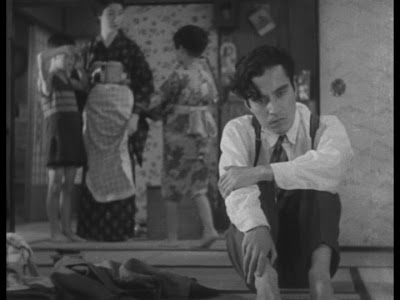 I assume that the prominence of Tokyo Story, which seems to get far more repeat exposure than other Ozu films, explains why the director is so persistently associated with an entirely melancholy view of life; it's almost a pity that the later film casts such a long shadow given that Ozu is equally adept in comic mode (or, as here, in melding both comic and dramatic treatment); ultimately, his nuanced, humane view of the world shines through irrespective of the means of expression.

Even where Tokyo Chorus compiles wonderfully extended gags about, say, salarymen receiving their wage packets or the adventures of troublesome children, Ozu never loses sight of the social reality of his films. Thus, while the film's lead actor exchanges slapstick blows with his overbearing boss, another employee deals with a shoe that's falling apart (which punctures the boss's alleged generosity while also underlining how precarious things were in the early 1930s). Ozu has an exceptional eye for the minor details of life - the street dwellers who make use of the remains of a cigarette butt, a former teacher who suddenly realizes he can't fund dinner for all of his students, or an elderly, suddenly unemployed, salaryman with healthcare concerns that are strikingly contemporary: one of the most worrisome aspects of job loss in the US is the simultaneous disruption in health insurance, if you ever had it to begin with. 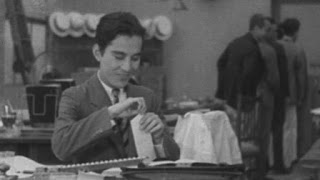 Although those poignant moments linger long in the memory, they are balanced with Ozu's wonderfully light work with his child actors; the interactions between brother and sister - a punch here, an argument there - are entirely natural, while there's an undercurrent of comment on family ties and obligations that takes fuller flight as Ozu's career developed.

Note: For some reason, my usual computer program/screen capture software didn't work with the Criterion/Eclipse DVD; the images above came from DVD Beaver and Criterion. I also made use of David Bordwell's detailed account of the film in his Ozu and the Poetics of Cinema, originally published in 1988, and now available online. Update July 2010: Craig Keller has put up a very interesting, personal take on the film, complete with numerous screen captures.