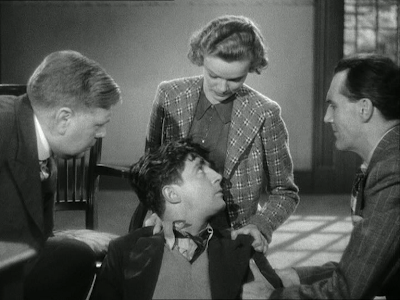 
Young and Innocent is surely the least known of the sextet of brisk thrillers that Hitchcock reeled off from 1934 to 1938, perhaps partly because it is saddled with a title that possesses neither the intrigue of something like The Man Who Knew Too Much nor the punch of a Sabotage. At least it's a bit more catchy than A Shilling for Candles, the Josep hine Tey novel from which the film is drawn. Tey's fine work seems remarkably under-appreciated by filmmakers, incidentally, with only The Franchise Affair prompting frequent attention. 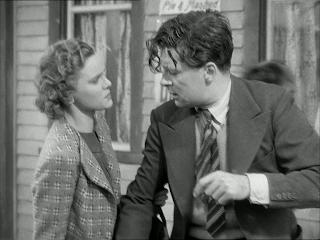 The film opens on a scene of almost brutal marital strife, with a couple arguing bitterly as their union very obviously disintegrates; the scene is so fraught that I expected the camera to cut away and reveal that we were watching a stage play or a film set, since there's nothing quite as scalding in any of the other Hitchcocks from this period. After the scene's dramatic finale on a storm-tossed cliff we cut almost immediately to a much more light-hearted treatment (leaving aside the discovery of a body), with a young man (Derrick De Marney) so incredulous about his arrest that he simply doesn't take the whole affair seriously.

The central sequences recount the young chap's adventures on the lam as he and the local police chief's daughter (Nova Pilbeam, the kidnapped daughter from The Man Who Knew Too Much) try to establish his innocence, and the increasingly enamoured pair roam across the countryside and into the city in search of a vital clue. There's a phenomenal crane shot near the end that arcs across a hotel room to focus unsparingly on the killer, paired with an almost equally audacious shot out from the now unmasked killer back to the bustle of the hotel. What's key to both shots is the way in which they contribute to the momentum of the film rather than being mere directorial flourishes - the first sequence is desperately tense, ending up almost in the actor's eyes despite starting its journey far across the room. Earlier, Hitchcock derives similar tension from a shot of De Marney as he walks into a dorm in a men's hostel, the camera dollying back in front of him and then moving from left to right as he scans the beds in search of his man. As technically dazzling as the work is, it's again fully justified by the needs of the film, with Hitchcock adeptly moving from the drama of the mystery plot to the comic relief of the police chief's dinner table.