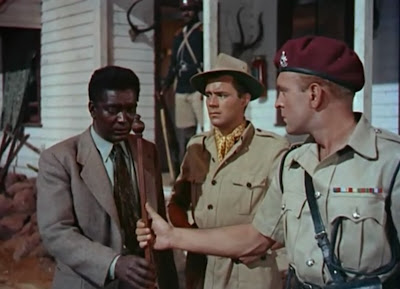 Amazingly, the British administration in Kenya seemed to be quite happy to allow overseas film crews to traipse through the colony throughout the 1950s "Emergency", so-named after the imposition of a state of emergency in 1952 in response to the Mau Mau insurgency. Stranger still, officials in Nairobi granted filming permits to three films which had Mau Mau, and race relations more generally, as their primary subject matter, only to turn around and ban the films when they were then submitted for censorship in Kenya a couple of years later. Indeed, they ended up banning most films shot on Kenyan soil during the decade, whether or not the subject matter had anything to do with Mau Mau -- and banned dozens of other American, British and Indian films to boot. 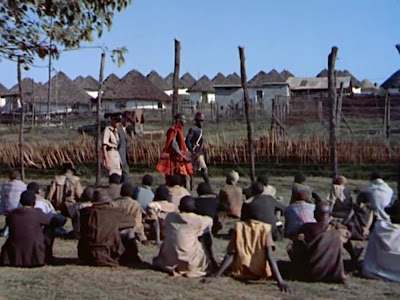 Dirk Bogarde plays a young colonial who inherits a Kenyan farm after his elder brother is brutally slaughtered by Mau Mau. Unexpectedly thrust into the role of white farmer, Bogarde's character wavers between a distaste for Africans, some of whom killed his brother, and the liberal white condescension of his inamorata, Virginia McKenna. Of course, Rank wasn't about to let its hottest property jet off to Kenya in the middle of a violent insurgency -- leaving aside the safety concerns, they had to keep him hard at work churning out several films a year at Pinewood. Instead, director Brian Desmond Hurst took a small crew to Kenya in early 1954 to shoot location footage, employing an ersatz Bogarde in long shot and then making heavy use of back projection to create the illusion that the star was sweating under the hot sun rather than the studio lights. I'm not sure what the audience made of this in 1955 -- when they showed up at all, since the film wasn't a big hit -- but it looks awfully unconvincing today, especially given that the stand-ins are clearly different heights than the original articles. 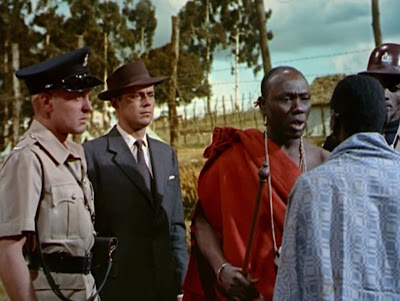 The real Sinden/Bogarde/Martins, with back-projection Kenya

Although it tries for a more liberal slant on matters colonial, the film's account of the origins and functioning of Mau Mau is typical imperial propaganda: atavistic tribalism, with little or no acknowledgement of the impact of a huge wave of postwar white settlement and expansion on the Kikuyu in particular. Indeed, for many Kikuyu, Mau Mau had more of the characteristics of a civil conflict than an imperial revolt, with land resources a major bone of contention. In other respects, though, the film is entirely accurate: the Kenyan administration assigned an officer to work with Hurst and his crew and they seem to have had access to all kinds of prison camps and military posts so the film provides a compelling glimpse into the actual logistics of late imperial control in Kenya. Indeed, Hurst and crew may have taken the quest for authenticity rather too far. They got in some major hot water when they returned from their Kenyan jaunt after newspaper reports revealed that several of the Africans featured in a Mau Mau initiation scene were prisoners at the time, and three of the men had apparently been hanged days after their scenes were filmed.

The film has a similar sacrificial attitude to its major African characters -- when not actively malevolent, they remain in the service of white interests, sacrificing themselves for the good of their white masters. Even the film's most complex and sympathetic African character draws the short straw, although in its own way this outcome underlines the fact that the Mau Mau conflict was far more likely to result in African rather than European deaths; 32 settlers died, sometimes in terrible circumstances, but that figure is dwarfed by the thousands of African deaths. Nonetheless, the film dramatizes half a dozen European deaths, tipping the scales very much in favour of interest in the settler population.

Note: This is part of the Watching Movies in Africa project, although in this specific case it should probably be re-titled "Not Watching Movies in Africa" given that Simba was banned by the Kenyan censorship board in 1955. I haven't been able to find any evidence that it played elsewhere in Africa, although given the presence of Nigeria's Orlando Martins in a small role, I wouldn't be surprised if it was released there. Numerous films banned in Kenya were released in Nigeria, and other West African locations, without apparent incident.