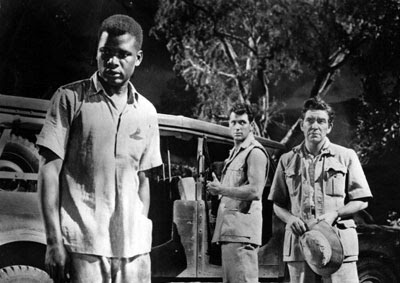 There are numerous similarities between Something of Value and Simba, with both films delving into black-white relations in Kenya during the Mau Mau period. Unlike Dirk Bogarde in the earlier film, Rock Hudson did actually spend some time in Kenya so the film has a greater sense of authenticity in many of the outdoor scenes, and doesn't have to make quite the same use of back projection and long-shot trickery.

Although the tone is still very paternalistic, with the white characters attempting to "solve" the problems of Africa -- many of which they created -- the film also has a touch more subtlety in its exploration of race relations even if the conclusion is remarkably similar, down to the suggestion that only future generations will be able to live peacefully. The American film is certainly much blunter on the fact that Mau Mau was much more likely to result in Kikuyu deaths than European deaths, though, even if those European deaths get far more screen time; one sequence is especially terrifying as a bloodthirsty mob methodically destroys everything in a settler farmhouse, closing in gradually on their human prey.

Brooks's film reminded me at times of Ken Loach's films Land and Freedom and The Wind that Shakes the Barley, using devices such as a settler meeting to outline many of the issues for the audience's benefit, with the poles of opinion clearly demarcated. Loach used a courtroom to similar effect in the latter film, and indeed the device of two brothers on separate sides of an issue re-appears in the Loach film, too (near-brothers in the case of Hudson and Sidney Poitier; the two men grew up together).

Note: This is part of the Watching Movies in Africa project, although like Simba this film was banned by the Kenyan censorship board even though large portions of the film were shot in Kenya, including scenes of actual Kikuyu internment camps. Records in the national archives in Ghana suggest that the film was initially passed for release in that country, but that it was subsequently withdrawn and examined a second time, in the middle of 1960, resulting in a ban -- and a hefty loss for the company that had imported the film, since they couldn't get a refund on a film they had been able to screen at least once.