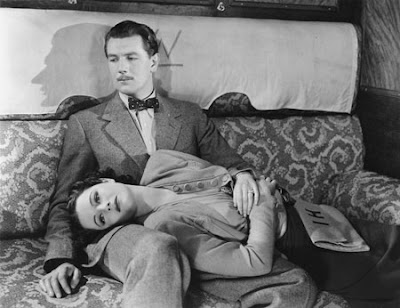 I hadn't seen Hitchcock's zesty comedy-thriller for nearly twenty years, and so had completely forgotten the opening of the film in a small alpine town: fully a third of the film unspools before the characters ever make their way aboard the train where the plot kicks into full gear. There's nothing wasted in that extended prologue, though: the overnight antics in a crowded hotel set up a multiplicity of later onboard relationships, while it's also a healthy reminder that Hitchcock had a surprisingly light touch with comic business, at least in this phase of his career, whether in the form of the buffoonish Englishmen abroad duo of Caldicott and Charters or the delightful Margaret Lockwood as the eponymous lady, utterly unflappable in any circumstances.

There's constant back and forth between the films in Hitchcock's 1930s output -- spies, overseas jaunts, dramatic train rides all feature in other decades, though the director varies the tone across films, going from high seriousness in much of a film like Sabotage to an almost farcical note here. After seeing most of those other films again in fairly ordinary small-screen versions it was wonderful to see the film in a crisp big screen print: the opening scene-setting shot in the mountains is particularly impressive on the larger canvas, the camera moving down from an overview of the snowy town to the ground-level details with a dash of humour.