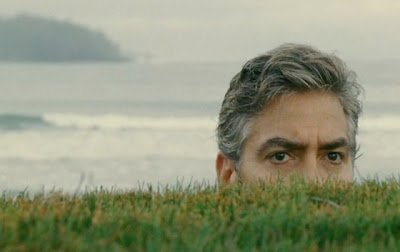 2011, US, directed by Alexander Payne

In its own small way, a film of some historical moment: it marked the first time we managed to attend the same cinema screening since the birth of our son. After about twenty minutes, we were reflecting that the choice of film was perhaps inapt, given that much of the film revolves around a foundering marriage -- albeit with one of the parties in a hospital bed, beyond reach of any words -- and the challenges of dealing with children. The early sections are only very lightly leavened with humour, as the film sets up both the familial dynamics and the film's other major plotline, regarding a swathe of pristine Hawaiian property primed for development.

The opening is strikingly low-key, as if reflecting the shock that George Clooney's central character is presumably working through, and it's his slow re-emergence and emotional re-connection that gives the film much of its narrative momentum. Still, between Payne's previous films and the bait-and-switch trailer, we hadn't expected to feel quite so glum, and it's not until the arrival of an unexpected newcomer, in the form of a high school goof, that the film finds a new tone with which to play, gradually blending together the entirely serious familial themes with a vein of oddball humour that's further amplified by the irascible, and sometimes plain asshole-ish, father-in-law played by Robert Forster. Clooney tamps down his charm, at least in so far as he can, creating a rather fine portrait of middle-years confusion that looks rather more effortless than it presumably is; he's starting to remind me a little of Clint Eastwood in his gradual growth into an older persona, looking forward rather than back to his youthful glories.