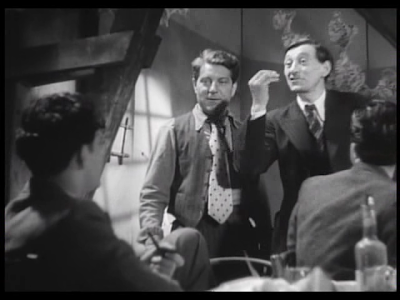 I'm starting to see Bertrand Blier every time I cue up a French film from the 1930s. First Les Bas-fonds put me in mind of Tenue de soirée, and now Jean Gabin has me thinking of more or less any of Gérard Depardieu's roles for Blier -- Gabin's opening scene here, full of bluster and physical energy is like every entrance Depardieu made for Blier, a force of nature constantly pushing at the bounds of the screen. Gabin plays a much more reliable type than that generally essayed by Depardieu in oafish mode, but the similarity perhaps owes something to both actors' origins in the music halls (or their rough 1960s equivalent the café-théâtre): they're always ready to improvise to catch the eye, and are as adept with movement as they are with dialogue. Gabin even throws in a song and, later, a dance, lovely moments that recall the versatility of a Cagney on the American screen. Even with company like Charles Vanel or Raymond Aimos, another Duvivier regular, Gabin commands the attention: although the film wasn't a huge success in its time, it's a terrific vehicle for the actor's particular charm.

More or less from its release in 1936, and increasingly so as the decades advanced, La Belle équipe was co-opted as a film of the Popular Front, even though director Julien Duvivier denied any political intention. I can certainly accept his contention that the film wasn't intended as an analogy for the Popular Front itself -- whether with its original, wholly tragic ending or the bittersweet replacement, it's not constructed in any sense as a blunt allegory. However, it's hard to avoid the regular references to the politics and policies of the time, or the celebratory references to earlier republican ideals (the toast to Léon Gambetta, for instance) -- as though Duvivier, a highly adaptable filmmaker, and his fellow script-writer Charles Spaak breathed in something of the air of the times and infused it into their film almost without realizing.