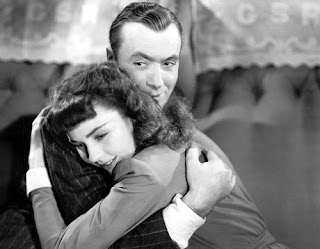 Sought out after reading David Cairns's comments on the film, Cluny Brown does rather seem the poor cousin in the Lubitsch filmography, at least -- though not exactly unloved by those who've seen it, the thing is that not nearly as many people have, these days anyway. As David points out, it's a little hard to understand just why this might be -- the leads are absolutely terrific (Charles Boyer shades it for me -- he underplays exquisitely at times, whereas Jennifer Jones hardly knows the meaning of the word, at least here), the dialogue sparkling, and the insight into the British class system is razor sharp, never more so than the by turns amusing and devastating scene when the toffs realize they've taken tea with the new maid. Plus, there's C. Aubrey Smith, old codger extraordinaire.