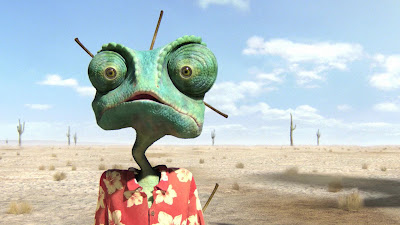 As over-stuffed as they are, I very much enjoyed the three Verbinski-Depp entries in the Pirates of the Caribbean series, a trio of quite consciously fun films that, I think, treated fans with some degree of seriousness, expecting them to keep up with the multiple plotlines that sprawled outwards over the course of the films. This is a rather more personal project -- though water is again a central component, albeit for its scarcity rather than its abundance -- which gives a kind of retrospective glimpse into the ways in which Verbinski managed to preserve some of the same free-wheeling spirit in the confines of a $200 million blockbuster, with unexpected references colliding, and outsize characters quickly etched with a few key visual tropes. Without any context to anchor it, the ah-now-I-get-it opening is a little rocky -- Pirates waited until the middle of the third installment to throw in something truly wacky in the form of the multiple Jack Sparrows -- but once Rango is liberated to experience his story, Verbinski really his his rhythm, zipping along without becoming antic, and slowing down to savour a reference or a particular character, such as Ned Beatty's slippery mayor.