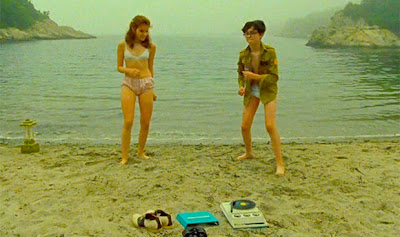 Along with Buster Keaton's Sherlock Jr., Wes Anderson's film made me laugh more than anything else this year, perhaps unsurprisingly given the obviously Keaton-esque aspects of Moonrise Kingdom, though of course Anderson also extracts much humour from his dialogue, an outlet less available to Keaton in his glory years. Anderson has always reveled in the artificiality of his set-ups and his scripts, and yet here, at least, it's no barrier to the creation of situations that seem grounded in genuinely human flaws and strengths -- it's as though he's somehow pushed the artificiality to a point where it serves as the underpinning to a new level of emotional richness. For all the irony of his dialogue, and the often delicious line-readings served up by his actors, Anderson treats his central characters with absolute seriousness and respect, in ways that reminded me of John Duigan's Flirting, another film that takes adolescent or teen love at face value.