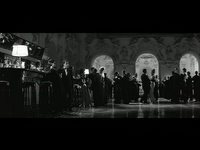 One of the most challenging films to emerge from the French New Wave, L'Année dernière à Marienbad pushes back conventional notions of cinematic storytelling, prioritizing form absolutely above content. The script, by novelist Alain Robbe-Grillet, is a carefully constructed set of themes and variations, rigorously structured, and employing repetition to create a disorienting atmosphere. The nominal plot involves a man's attempts to convince a woman that they met a year before - and perhaps had an affair - but the script is far more interested in playing with our own expectations than in resolving this essentially simple problem. The film is shot in stunning black-and-white by Sacha Vierny, with Resnais employing an exceptionally mobile camera that glides up and down the corridors of the luxury hotel where the film is set, caressing the architectural details and the rich decorations. Although the film's concerns are not those of a more conventional narrative, it nonetheless creates an unsettling sense of oppressiveness, underlining the essentially joyless interactions of this group of wealthy vacationers, whose days are filled with empty pursuits. It's hard to avoid the sense that Resnais and Robbe-Grillet probably aren't the most entertaining pair with whom to share a drink - unless, perhaps, the film also functions as a kind of wicked joke at the expense of our intellectual pretensions.