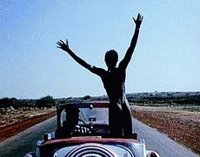 Although it's an exceptionally challenging, and provocative, piece of work, Touki-Bouki retains an extraordinary freshness and power more than 30 years after its release; there's still a palpable sense of anger at Senegal's post-colonial circumstances. The country's relationship with its former 'master', France, is at the core of the film, particularly expressed in the conflicted hopes and dreams of young Africans, torn between tradition and the promises (or illusions) of wealth and opportunity as embodied in the idea of France (or more specifically Paris; Josephine Baker sings "Paris, Paris, Paris" to ironic effect on the soundtrack). Although Diop Mambéty's vision is disorienting and experimental, the tale at the heart of his film is simple, with two young lovers figuring out how to get ahead. The film is shot through with a vein of rich, black humour, and if it lacks the perfect humanist simplicity of his beautiful final work, La Petite vendeuse du Soleil, it does nonetheless have a sense of visual poetry that's often quite mesmerizing. In many ways, too, the film is a keystone to understanding Diop Mambéty's later works, especially Hyènes. Those who are sensitive about the conversion of animals into meat should probably give the film a wide berth, though; the film is blunt about the realities of life in both broad and specific terms.