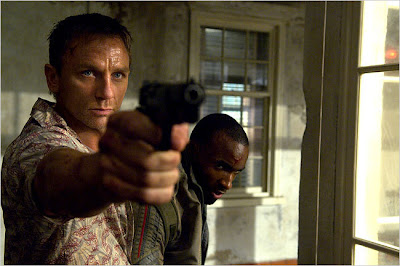 It's no mean task to breathe new life into a franchise that's in its forties, but the producers cannily brought back several of the key personnel (most obviously director Martin Campbell) who dragged Bond into the modern era with 1995's Goldeneye, and give them further freedom to develop a new tone (with another new Bond). Where Pierce Brosnan's Bond played the smooth angle to the hilt (with Brosnan later trashing that image in films like The Matador), Daniel Craig (whose features might have typecast him as a Boer cop) brings back some of the raw thuggery of the first Bond films. The fights here are as brutal as the famous sequence which pitted Connery against Robert Shaw in a cramped train compartment in From Russia With Love and serve as a salutary reminder that violence, even in a Bond movie, shouldn't be taken too lightly. The early going also features some spectacular parkour stunt-work, performed by Sebastien Foucan who, unusually for a stunt player, gets an opening credit for his work.

Just as the violence is a touch more realistic, the plotting focuses on a criminal banker whose interests lie in financial gain rather than the kind of world domination that became so laughably repetitive in previous entries; it's a refreshing return to earth, not least because it eliminates silly sequences in which Bond escapes from elaborately choreographed death and destruction. It takes some time to get used to Daniel Craig as Bond: he's not just new but genuinely different (as my wife commented, it's not hard to imagine that "James Bond" is itself a code name, just like 007, since there's no sense of a past history), but by the end of the film Craig has made the role convincingly his own. He's surrounded by an unusually good group of supporting actors, who are, crucially, given interesting things to do; Eva Green and Mads Mikkelsen are especially strong. The main flaw is length; like many recent Bond entries, Casino Royale overstays its welcome and there's a tacked-on sense to some of the closing sequences, where you constantly expect the closing credits to roll.