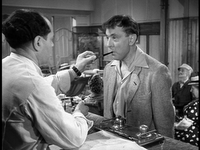 
Although Jacques Tati is often seen as France's supreme comic filmmaker (at least outside France, since so many of that country's huge comic hits are barely known in the English-speaking world), it's interesting that his influence often seems most obviously apparent in British comedy. It's hard to imagine performers like John Cleese or Rowan Atkinson without Tati, and more specifically without Monsieur Hulot and the chaos that constantly accompanies him. For all the manic energy of a show like Fawlty Towers, it's also based on the kind of acute human observation that makes Les Vacances de M. Hulot such a treasure: Hulot himself, with his Tintin-esque hairdo, is a wonderful creation, but Tati is just as fascinated by the other residents of the beach town where the film takes place, casting his generous eye over everything that happens, and weaving gags from the most unlikely sources. Those visual jokes emerge organically from the loosely connected scenes: there's no obvious punchline much of the time, emphasizing that the humour is really just a lightly burnished version of reality rather than something that draws attention to itself. Tati also pokes gentle but insistent fun at the regimented nature of French holiday habits: Hulot, by contrast, seems to take things as they come, and the disruptions that follow him have the happy effect of shaking up everyone's routine. The gags are beautifully constructed - the timing is perfect, scene after scene - but the film also looks wonderful: Tati is a true visual artist rather than just a simple humorist.