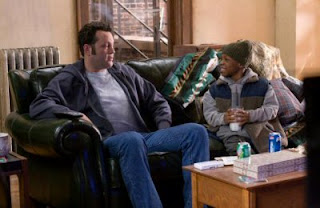 Every American holiday season brings at least one new heartwarming Christmas tale, and Fred Claus was 2007's entry, offered a year later on a December plane ride from Boston to Los Angeles. Perhaps under the influence of Terry Zwigoff's Bad Santa, the film attempts to recast the Christmas mythology somewhat, with Vince Vaughn playing Santa's ne'er-do-well older brother, a Chicago resident with a succession of outlandish get-rich-quick schemes. Vaughn is good at this kind of part, delivering his trademark page-at-a-time monologues - though Wedding Crashers director Dobkin relies much too heavily on Vaughn's ranting ability - and looking suitably disheveled.

When push comes to shove, though, the sweetness quotient is turned to high, with life lessons learnt on predictable cue, and any grit and bite excised (before that, there is a very amusing sequence, featuring Frank Stallone, Roger Clinton, and Stephen Baldwin, when Fred attends a meetng of "Siblings Anonymous"). Dobkin has assembled a very solid supporting cast, including Paul Giamatti and Kevin Spacey, but their roles are almost all very limited; you wonder what, apart from the paycheck, attracted an actor like Paul Giamatti, normally more judicious in his choice of parts.