Rain of the Children 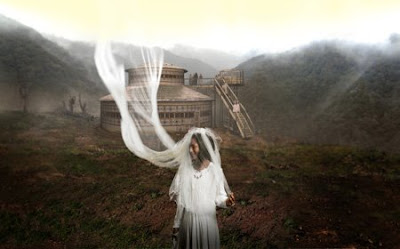 An unusual film in which director Vincent Ward returns to the territory of his first feature, In Spring One Plants Alone, a documentary which he began filming when he was just 21, about an elderly Maori woman, Puhi, and her adult son. At the time of the original film, Ward was primarily interested in Puhi for the ways in which she represented a continuation of traditional Maori life. Raised in a very rural area himself, Ward spent almost two years in Puhi's community as a young man, and he re-uses much of his older footage here, as he links Puhi’s hardscrabble later years to the extraordinary story of her youth, a story which he says he sensed but did not understand as a younger man.

Puhi was linked to a charismatic Maori leader, Rua Kenana, who led a group of Tuhoe Maori as “chosen people,” one of many such groups which developed in the wake of nineteenth-century missionary activity; Rua‘s group considered themselves to be lost children of Israel. Puhi, who was born around 1900, married one of Rua’s sons, who was killed when their community was raided by colonial police. Puhi was also believed to carry a curse, one which trailed her and her descendants, and Ward’s film is ultimately an attempt to understand the nature of these powerful beliefs. Many of the contemporary Tuhoe interviewed by Ward struggle for words when trying to convey the nature of their beliefs about the curse, though none deny that there is a form of curse, and Ward probes repeatedly as he tries to deal with forms of belief outside his own experience, while also relating some of Puhi’s struggles to more Western views of mental health.

The film is a blend of footage from the late 1970s, modern interviews, and re-creations of events from the early twentieth century, and at times it is very successful in conveying the realities of Rua’s self-appointed mission, while also serving as an extraordinary window into the Puhi’s modern life, a life which involves phones and cars and yet which seems, in other ways, barely touched by modernity (it would be interesting to see the full original film to get a better sense of Ward's original preoccupations). As a search for explanations, however, it's not always completely successful - at times, you feel as though Ward is repeating the same questions both to his interviewees and to himself without ever making much progress in his own thinking - but it is a heartfelt attempt by a Pakeha New Zealander to grapple with the complex belief systems of some of his Maori compatriots, and a compelling meditation on the nature of history itself.