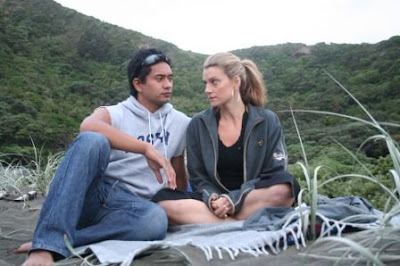 
Shot on HD video, Athina Tsoulis's second feature is a domestic drama about a woman returning to her family after ten years in Los Angeles, years in which she has done everything possible to forget her past, discarding her accent, personal history and, at times, her dignity as she seeks to erase unpleasant memories (the film opens with a startling scene as the protagonist, Laura, played by Sara Wiseman, picks herself up after an unwise night on the town).

The film is primarily concerned with the idea of reconnecting - with family and with country, and the scene where Laura drives from the airport to her hotel cleverly captures the way in which she tries to come to terms with the accumulation of little details that has transformed the streetscape since she last visited Auckland. The film is set in a low-key, predominantly Maori southern suburb, away from the bright lights and with its own distinct community ethos, which Tsoulis transfers nicely to the screen.

At times, the domestic dramas, as Laura attempts to renew contact with her sister, shade into melodrama, though one such twist is followed by a scene of such honest insight into the characters' lives that ultimately it's a powerful addition to the film. For the most part, the performances are nicely judged, too; veteran William Wallace is especially good, and has a moving scene with relative newcomer Jarod Rawiri, while Sara Wiseman makes the most of her starring role, revealing a few rough edges but rising to the challenge of drawing us in to the story of often unsympathetic character.