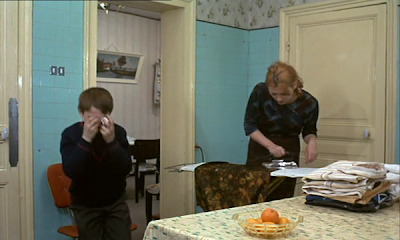 1968, France, directed by Maurice Pialat
Although it's a little rough around the narrative edges in the concluding segment - the protagonist's final transformation seems abrupt, signaling a more radical change in character for which we haven't been fully prepared - Pialat's L'Enfance nue is an extraordinary feature début, a film of deceptive simplicity that's both visually compelling and politically bracing (I suspect Pialat wouldn't have found much merit in criticisms of the narrative progression, in any case). 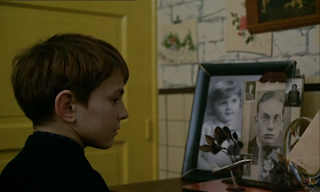 Pialat's pursuit of a clear sense of place and time is announced in the opening images, depicting a union march, presumably an actual event, before transitioning to the story of a young boy moving through the fostering system. In many respects, Pialat's primary fascination is with France's institutions and the way in which the country treats its citizens and, indeed, makes them into citizens in the first place. He provides a detailed depiction of the world of fostering and child services, making clear both the problems and benefits - to the foster parents - of the system (and using real childcare workers as actors). That portrait prefigures, among other things, the school scenes in his subsequent work, the First World War mini-series La Maison des bois, scenes that are again about the ways in which the state instills ideas of citizenship. 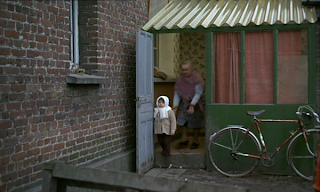 Equally striking is Pialat's deeply humane view of his characters, and his avoidance of miserabilism even while acknowledging the difficult, financially strained lives he depicts. There's an exceptional warmth to the way in which he captures many of the conversations, an ear for the rhythms that sustain life - the courtesies and moments of humour that pepper every day (the two old women laughing over the discovery of a skin magazine, or the scene in which one of the women sings, in a quavering voice, songs of her youth). That ear for dialogue and the "privileged moment" finds its visual counterpart in Pialat's ability to direct the eye to unexpected splashes of colour - as seen in the yellow, blue or green in the stills above, for instance, or the careful composition of the shot below, with a band of brightness sandwiched between dark hats and grey skies. There's nothing heavy-handed about this use of colour, grounded in Pialat's training as a painter, but it equally gives the lie to the idea that there's something artless about his work. 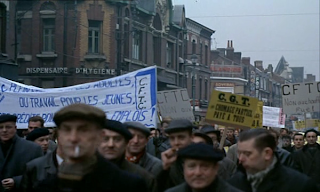