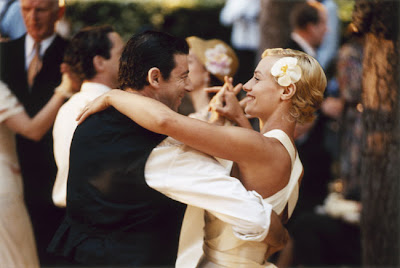 
There's something immensely pleasurable in coming across a well-made film, where the parts are carefully slotted together and there's a payoff for investing time and energy in the narrative. I suppose it's the old-fashioned idea of "craftsmanship," something that you find in, say, the works of Peter Weir. It's not all that cool, but it's also a remarkably difficult thing to do given all of the imponderables and unpredictabilities of a film shoot. Claude Miller's films are always characterised by this kind of artisanal care, even when they don't always quite succeed as involving stories. His L'Accompagnatrice, with a similar period setting, never came alive for me, and I've read various critiques that find this film to be similarly lifeless: I wonder if that's the point where taste begins to interact with technique, for I found Miller's film to be entirely compelling even when I had occasional questions about the directions in which the narrative was pointing me.

The film plays with time, interweaving episodes from the war years with events from the 1950s and, more briefly, a single day in the 1980s where many aspects of the story finally come together, although we receive much of our information out of order, so that we're constantly - and quite deliberately - questioning whether we've yet encountered the eponymous secret. There's a careful distinction of each period in visual terms, too, although the bright 1950s scenes are not quite what they first seem, and that shimmering veneer is slowly undermined as the film proceeds.

Although there's a story to be told, and a secret to be revealed, Miller is ultimately more interested in issues of identity. Underneath the polished sets and solid acting, there's something surprisingly bold going on, as the film tries to make the point that Jewish experiences of and in the war years were by no means monolithic; one of the main characters (played by Patrick Bruel, still best-known as a singer in France) chafes constantly both against authority (French, German, familial) and what he sees as the confines of his own upbringing. Part of the challenge for the character is reconciling his own instincts with a Jewish identity that is being forced on him by outsiders rather than because it has any importance for him, and yet inevitably his life experiences confront him with difficult questions about his own sense of self. It's one of those films you can imagine dissecting over a beer afterwards, since it tends to pose more questions that it's fully capable of answering.