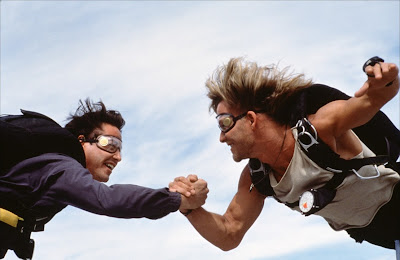 1991, US, directed by Kathryn Bigelow

With the advent of mobile phones and the Internet, films from the 1990s, especially cop/FBI films, seem extraordinarily quaint in some respects just fifteen years on, but Kathryn Bigelow's flick retains virtually all of its freshness given her breakneck pacing, contempt for procedural detail, and kinetic action construction. Although there are aspirations to something more than just another high-energy film through the deconstruction of action tropes and the riffing on the not-always-that-subtle-to-start-with gay subtext of many a male-bonding flick, what really marks the film as different is the sheer adrenaline on display: Bigelow makes you feel as though the action is real both by asking her actors to take unusual risks - they jump out of planes and surf big waves - but by cutting her shots together so that we're always aware of where the characters are and whether or not they're in peril. She has a terrific sense of space, and an ability to convey that to the audience; that's something at least as valuable as any effort to comment on the action genre more broadly, since I'm not always convinced she's telling us things we hadn't known before (it's hard to imagine anyone watching, to give just one example, the slow-motion-in-the-rain antics of Lethal Weapon, four years earlier, without at least wondering about the "subtext").